The evidence is clear – mass killing is underway in North Korea, argues Robert Park. The international community can no longer stand idly by. 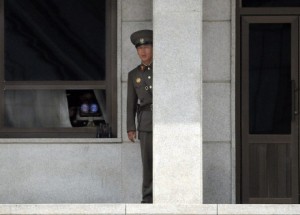 Has North Korea violated the international norm known as the Responsibility to Protect to the point that intervention is warranted? I would argue the answer is an unequivocal “yes.”
Certainly, North Korea is believed to have committed acts that many would consider genocide, including executions and state-sanctioned murders, the systematic use of torture, state-induced mass starvation in political prison camps (and arguably elsewhere), forcible abortions and infanticide, and the forcible transfer and enslavement of children.
In 2007, Christian Solidarity Worldwide published a report based on seven years of research, and written by international lawyers, which concluded that there are indications of genocide taking place against religious groups in North Korea, specifically against Christians. Indeed, Christian watchdogs such as Open Doors and Release International rate North Korea as the world’s most egregious violator of religious rights. But North Korea’s policy towards its indigenous religious population extends far beyond “persecution” – religious believers and their families are being exterminated.

Before the rise of the Kim Il-sung, an estimated 25 percent to 30 percent of Pyongyang’s population was Christian. Today, all traces of this once-flourishing religious community and culture have been obliterated. Recognizing the inherent threat posed by faith to totalitarian rule and the Kim cult of personality, the North Korean regime has since its inception committed genocide against religious believers and their families.
There are many indications of the specific intent to destroy religious groups in North Korea. Harsh punishment is meted out to repatriated North Korean refugees who have had contact with missionaries and churches in China. Refugees, after being forcibly returned, are tortured and interrogated to discern whether they had any contact with religious groups. Those that confess to, or are suspected of, having met with missionaries in China or converting to Christianity are either killed or banished to concentration camps for life along with their entire families, including children, to three generations. Open Doors estimates between 50,000 and 70,000 Christians are imprisoned in North Korea’s concentration camps today.
These Christian human rights organizations believe that North Korean Christians who haven’t been publicly executed or killed through beatings or starvation in the prison camps have even in some instances been used as guinea pigs in chemical and biological weapon experiments – an allegation which is by no means new.
North Korean refugees, including former prison camp guards who played a role in these atrocities, have been speaking out in an attempt to get the international community to pay attention for over a decade, but to no avail. Hundreds of thousands of North Koreans have been forced to flee to China in order to survive famine and oppression. The majority of these refugees are women, many of whom have become victims of sex-trafficking or have been sold into forced marriages.
North Korea also continues to systematically brutalize women and children through infanticide and forced abortions. The office of the U.N. High Commissioner for Human Rights has acknowledged officially North Korea’s “continued violation of the human rights and fundamental freedoms of women, in particular the trafficking of women for prostitution or forced marriage, ethnically motivated forced abortions, including by labor inducing injection or natural delivery, as well as infanticide of children of repatriated mothers, including in police detention centers and labor training camps.”
Multiple reports over the last ten years have indicated that infanticide and forced abortions on ethnic grounds is taking place systematically in North Korea’s prisons. This practice corresponds with the country’s obsession with racial purity, and the intent to destroy racially “mixed” babies on ethnic grounds is clear and incontestable.
According to the Responsibility to Protect norm, the international community has an obligation to intervene when a given state manifestly fails to protect its population from genocide, war crimes, ethnic cleansing and crimes against humanity, or is the actual perpetrator of these crimes; first by “appropriate diplomatic, humanitarian, and other peaceful means” and then by force, if necessary.

It’s noteworthy that the reputable Genocide Watch, an international NGO that “exists to predict, prevent, stop, and punish genocide” and whose board of advisors includes admirable anti-genocide activists such as Lt. Gen. Romeo Dallaire and Samantha Power (Special Assistant to President Obama and head of the Office of Multilateral Affairs and Human Rights); published a report on December 19, 2011 which found conclusively that North Korea has indeed committed genocide as defined in Raphael Lemkin’s 1948 Convention, stating that “Genocide Watch has ample proof that genocide has been committed and mass killing is still underway in North Korea.”

North Korea, as a genocidaire of the first order, is clearly a state perpetrator and manifestly demonstrating this “failure to protect.” It’s high time for the international community to act in North Korea.

Robert Park is a Korean-American missionary and human rights activist who went to North Korea on Christmas day in 2009 to protest against genocide and crimes against humanity. He is a member of the nonpartisan Worldwide Coalition to Stop Genocide in North Korea.

What Not to Do About North Korea